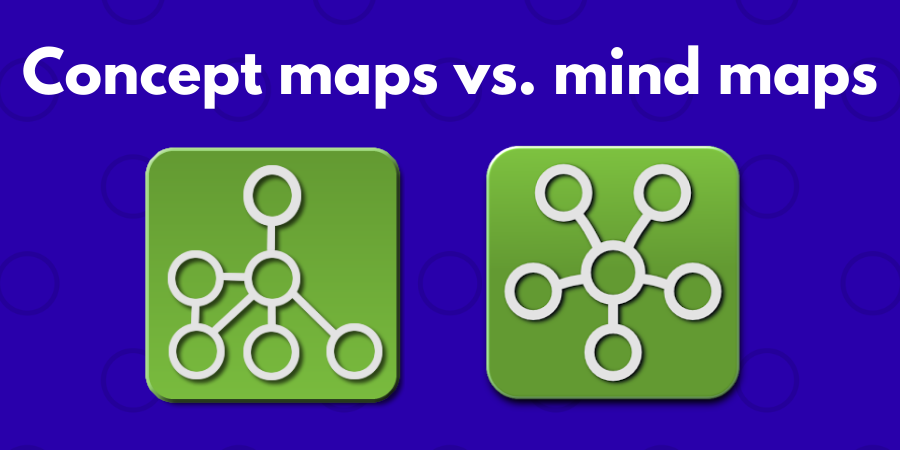 What’s the difference between concept mapping and mind mapping? These two types of visual mapping look very similar, which tends to cause a lot of confusion among people who are just learning about them. Here is a detailed comparison of these two popular types of diagramming and their uses in business:

Definition: A concept map or conceptual diagram is a diagram that depicts suggested relationships between concepts. It is a graphical tool that instructional designers, engineers, technical writers, and others use to organize and structure knowledge.

Visual structure: A concept map typically represents ideas and information as boxes or circles, which it connects with labeled arrows in a downward-branching hierarchical structure. The relationship between concepts can be articulated in linking phrases such as causes, requires, or contributes to.

One thing that makes concept maps different than mind maps is that a topic can have multiple parents and children. That makes it ideal for modeling complex relationships between pieces of information.

The main application of concept mapping is knowledge representation.

NEW – Concept mapping resource list: Want to know more about concept maps and their use in business? I’ve created an information-packed resource list that includes:

Definition: A mind map is a diagram used to visually organize information. A mind map is hierarchical and shows relationships among pieces of the whole. It is often created around a single concept, drawn as an image in the center of a blank page, to which associated representations of ideas such as images, words and parts of words are added. Major ideas are connected directly to the central concept, and other ideas branch out from those.

Visual structure: A central topic declares the subject of the mind map. First-level topics, sometimes known as “basic ordering ideas,” define the scope of the topic to be covered by the mind map. Sub-topivcs radiating from them are known as “child topics.” A mind map may contain as many layers of topics and subtopics needed to met the mind map’s purpose. Topics may be embellished with shape colors, fonts, size and ciolor. In addition, icons and images can be attached to mind maps.